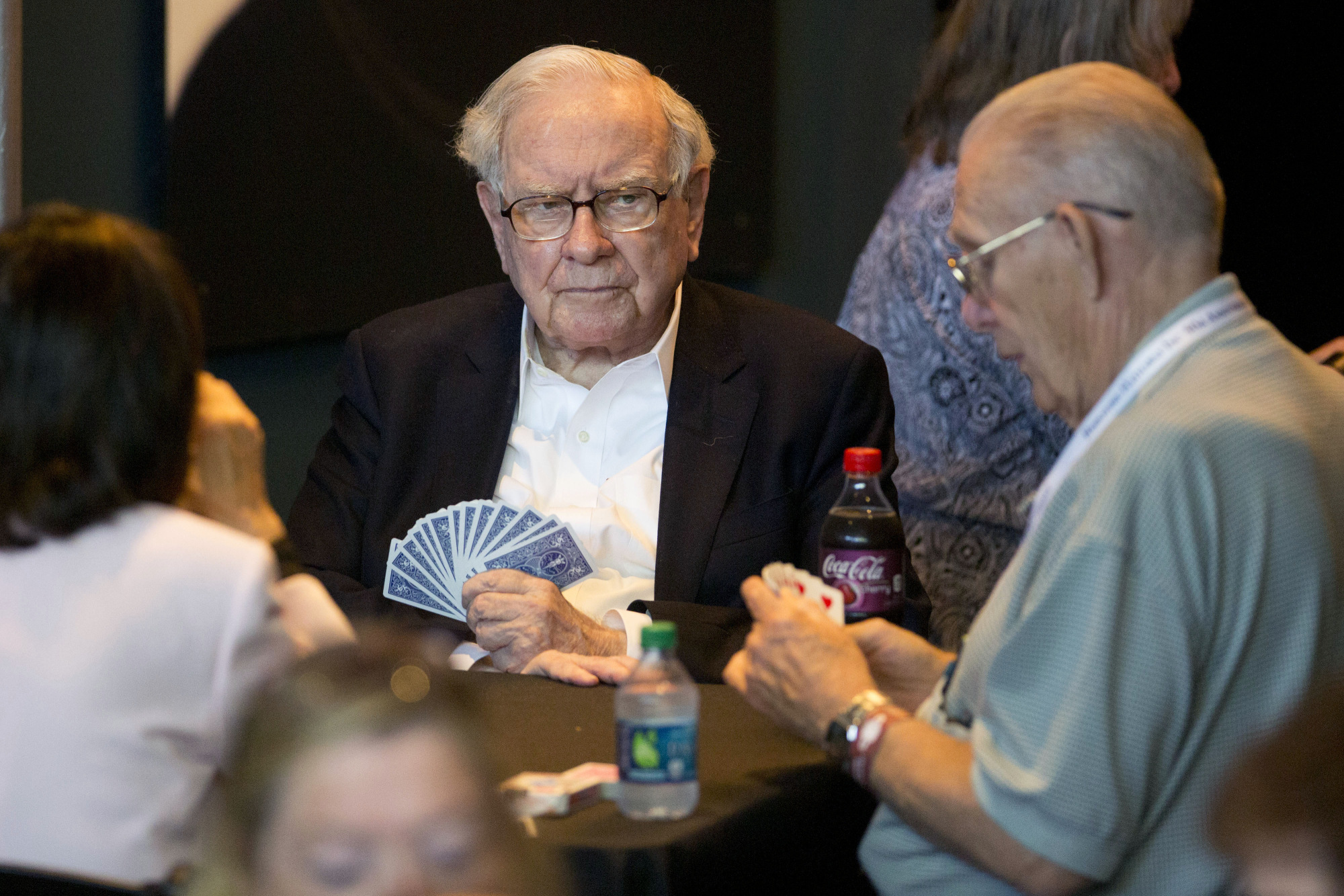 Warren Buffett secret formula that we will cover up in this article would help you to understand and learn investment strategies.

Berkshire Hathaway is the legendary name in the field of investment. And you know who is more legendary than that name? They are humans named as warren buffet and Charlie Munger. Though people know warren buffet more than Charlie Munger, in one of the interviews warren buffet said that Charlie Munger is more smart than him. But, may be people know him more because of his net worth. Investors try to follow pretty much every word Warren Buffett says, be it in interviews; his letters to shareholders of Berkshire Hathaway or his musings at Woodstock for Capitalists, also known as Berkshire’s annual shareholder meeting. Some people write those words and after framing hang those things on wall, some write it down on notebook and some people like me make videos on them. Whatever it is but you have to admit that his findings are really unique and his words are worth following in real world stock market.

What you’ll never get from the Oracle of Omaha is advice on the latest hot stock. He does not even invest in disruptive technologies. He likes to play with stock market using safe bets and not by following some quick profit stocks that have not proved themselves during uncertain times. Buffett’s investing lessons are about the importance of discipline, patience, and taking a long-term perspective. Talking about long-term investing, warren buffet made more than 70 billion dollars after his 50th birthday. That means he didn’t become rich overnight. This highlights the importance of discipline and patience. After referring some his letters to shareholders, I have come across some lessons that I think worth following in real world. So, in this video I will be discussing his four great investment lessons you can learn from him.
The main thing warren buffet always consider to do homework on the stocks that he is thinking to buying of.
It can be analyzing fundamentals or glancing at financials of company. But he always does some kind of information gathering process that helps him to take decision whether to buy stock or not.
He always says,” If you want to invest in individual stocks, commit to regular research. “If you like spending six to eight hours per week working on investments, do it,” And on top of that he already said. “If you don’t want to do this kind of research or you find it difficult, then dollar-cost-average into index funds.” Specifically, he is a huge fan of low-cost S&P 500 index funds for most investors. Because, S&P 500 indicates the performance of top 500 USA companies. And the most important thing is if any company underperforms then it is replaced with next company with performance better than underperforming company. And this is how You get automatic diversification because you instantly invest in 500 large-cap U.S. corporations, and the fees are low because they’re passively managed.
And One of the Buffett’s biggest rule is Never invest in a business you don’t understand. That’s one reason he’s long ignored most tech stocks and confusing investments like bitcoin.

But if you’re picking your own stocks, it’s not enough just to invest based on the metrics. It’s true that numbers don’t lie but reason behind the numbers depends on your perspective. Like in case of airline stocks. Numbers showed that it’s not good stock to hold in march but the reason depends on investors perspective. Some investors like warren buffet said now it’s over for airline stocks and he sold. But eventually they recovered as number of passengers increased. And the decrease in metric was not because of some fraud or you can say mal-practice by management its was purely because of pandemic. And it was clearly indicating that once pandemic gets over theses stock swill regain their value as people always choose flights over trains. If you want to go from California to Chicago. You are not going to go by train. Obvious choice is Flight. So, over the period of time definitely airline business will be on track. So, it depends on your perspective.
Next thing warren buffet agrees is your patience has important role to play than your smartness.
If you want to get rich the Buffett way, don’t expect it to happen quickly. Berkshire’s chairman is a staunch buy-and-hold proponent. And I already told you in beginning that warren buffet made more than 70 billion dollars after his 50th birthday. And he started investing in seriously in his 20’s. he has said “If you aren’t willing to own a stock for 10 years, don’t even think about owning it for 10 minutes,”. He even tells people not to invest in Berkshire Hathaway unless they’re willing to hold their shares for five years or more. You must be knowing there are two share of Berkshire one is class A and other is class B. The difference between those two is class A is expensive and class B is cheap and affordable to retail investors.

But a lot of people aren’t willing to invest with a focus on long-term results. That’s why Buffett believes that successful investing is more a matter of patience than intelligence. He’s often said that what gets people in trouble with investing is a lack of self-control. When market starts falling you lot of investors starts selling of their position. And that is the actual time you got tested for your patience. Those who fails end up booking loses in their portfolio. And those who wins they hold multi-bagger stock in their portfolio. And in one of my last videos I told you story of my friend how he lost his profit and end up with loss in march. At that time, he thought it’s over. When his profit started depleting, he couldn’t control him anymore and end up selling golden stocks that he bought at very low price. But, now most of them have already started trading at their pre-pandemic value. Human behavior is strange. Isn’t it? It is but its in your hand how you shape your behavior while market is falling. And in your lifetime I am sure you have seen one in march so you already got to experience that market falls sharply and also recovers which means you don’t have to panic and you can hold your position according to your risk appetite.

And according to buffet “The most important quality for an investor is temperament, not intellect,”. “You need a temperament that neither derives great pleasure from being with the crowd or against the crowd.”
Next lesson we can learn from warren buffet is Invest when everyone else is afraid.
If you approach investing with Buffett’s mindset, you don’t have to worry about another stock market crash. He explained in his 2009 letter to shareholders why the previous two years (the Great Recession) had been an ideal time for investors. And according to buffet “A climate of fear is their best friend,”. “Those who invest only when commentators are upbeat end up paying a heavy price for meaningless reassurance.” If you listen to news channel then it is not going to work as best example, I came across is of Tesla. Everyone almost every news channel IN USA was telling not to buy Tesla or go with shorting Tesla. But what happened Tesla which was trading at 400 dollars jumped and almost touched to 1500 dollars. But, after that Elon Musk took decision to split the stock. But you would have listened to news channels then you could have lost almost all of your invested money in it. And as far as those experts are concerned, they are paid by competitors to suppress the stock. Like in case of Tesla, there is chance that it Tesla’s competitors could have paid analyst to put downward pressure on Tesla. Who knows? I am not saying this happened or what I said is True but there is possibility of what may happen.

And along with this one more important thing is Warren buffet does not like to time the market. He told CNBC in February 2020 as the pandemic was starting to sweep the globe that “you can’t predict the market by reading the daily newspaper.” He’s a proponent of dollar-cost averaging, which means you invest regularly regardless of whether you think stocks are heading up or down.

D) Cheap is not always better

Next lesson to learn from warren buffet is Cheaper company isn’t always better company.
Buffett warns against overpaying for stocks, but he also doesn’t try to swoop in and buy just because a company looks like a bargain. His most wonderful quote is “It’s far better to buy a wonderful company at a fair price than a fair company at a wonderful price.”
Instead of searching for a company whose stock is cheap, Buffett looks for one with a competitive advantage, meaning it’s uniquely suited to provide something its competitors can’t — what he calls a moat. That moat can take a number of forms, like a cost advantage, a beloved brand, or a technological edge. In Buffett’s view, buying the pricier castle is well worth it when it buys you a bigger moat.

So, make sure you are keeping this lessons in your mind while investing in future.