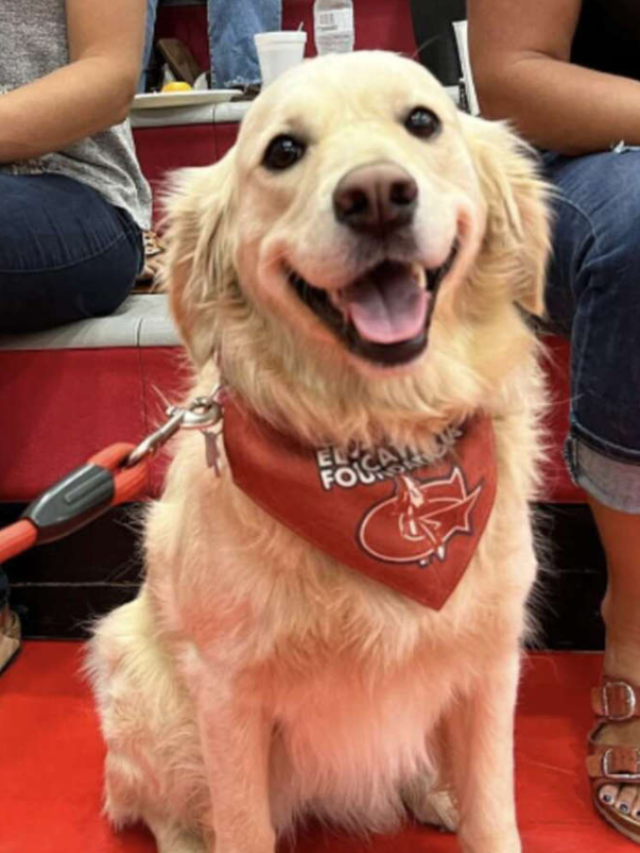 Golden retriever named Meg, in Ohio middle school managed to get her yearbook Style photo. Meg is a facility dog at school. Read more about this event.

Golden retriever named meg has always been with all the students , staffs and parents at Goshen Middle School, which is public school in Ohio.

Meg is a a facility dog at this school and her photo wearing red bandana with her name Meg on it as yearbook-style photo is recently making waves at an Ohio middle school.

According to Wendy Flynn, principal of Goshen Middle School, “The young, happy dog was trained for service from birth by Circle Tail, an approved assistance dog training business in Cincinnati.”

“This is her second school year at Goshen Middle School,” Flynn said. “Meg lives with Mrs. Kelly DeNu, a seventh-grade math teacher in addition to paraprofessional and Meg’s Handler , and her family.”
The principal said further that during her time at school she has provided so much love to all of us that Students schedule one-on-one appointments through QR code. and we post that appointments in every hallway of Goshen Middle School.

For those who don’t know what facility dog means then read ahead. A facility dog is a dog that works in a place rather than for a particular person. And fact about dogs is most historians believe that dogs were the first animals to be domesticated and that’s right the first animals to be domesticated. And catch this in the united states alone almost 43 million households own at least one dog. Wow dogs are so popular. And they are popular maybe it’s because they’re so much fun or maybe it’s because they’re so cute. There are 150 types of dogs and they look absolutely different from each other yet they are similar. Great danes which is one of the dog breed can get up to 30 inches tall and can weigh almost 200 pounds but don’t let their size scare you these dogs are super friendly they have been nicknamed gentle giants. And some dogs are really small like the chihuahua. Chihuahuas are usually between six to nine inches tall these are super small dogs very very very small dogs especially compared to great danes but even though they’re small they can have big personalities and make their presence known. Some dogs have specific markings like the Dalmatian. Dalmatians are famous for their white coat and black spots and you’ll find this interesting Dalmatian puppies are white when they are born but when they are about four weeks old their black spots appear that’s pretty cool. The pug is a small dog with a really cute wrinkly face they are sweet gentle dogs that are great around kids. Another Fact is Dogs see colors differently than we do it’s true so fascinating dog see colors differently than we do. Believe it or not people used to think that dogs were completely colorblind. Scientists later discovered that dogs can see colors. They just see them as yellows browns and blues.

That is some Amazing facts about dogs. Isn’t it? Moving on.

All of the school faculties say that she has bought smiles to all of our faces and we all consider her a member of our Goshen Middle School family. Finally, Flyn also thanked district and the Goshen Education Foundation for providing financial support to Meg as a facility dog.